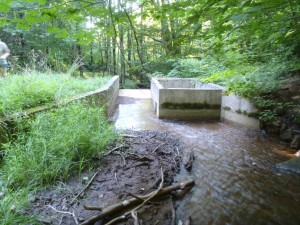 Timberline Four Seasons Ski Resort (Timberline) installed a water intake structure for snowmaking purposes in the early 1990’s on Idleman’s Run, a first order stream located within the Upper Blackwater River watershed in Canaan Valley, WV. This structure is located on land owned by Timberline, and currently captures the majority of the surface flow provided by the upstream portion of the Idleman’s Run watershed. The stream’s flow is routed into a snowmaking pond with the outfall of the pond feeding a wetland where the temperature, dissolved oxygen and water resources are diminished for use by the aquatic ecosystem. The entire stream and watershed is owned by either the United States Fish and Wildlife Service’s Canaan Valley National Wildlife Refuge or Timberline Resort’s conservation area.

Trout Unlimited, Timberline, and the refuge are working together to reestablish fish passage and restore the flow regime by installing a structure that diverts flow into the snowmaking structure only when appropriate according to flow conditions and availability. This will be done by installing a new intake structure to divert low flows into a newly created 100’ diversion channel that leads to the main channel below the current intake structure. Rerouting the main channel around the structure will enhance the connectivity of the watershed and re-establish flow below the structure. In doing so, it will increase available habitat and dispersal by re-watering approximately 1.14 miles of downstream habitat and allowing for passage to the upstream section for genetic dispersal and rearing of juvenile aquatic fauna. It will also provide clean, cold water to the main stem of the Blackwater River, a stream which is impaired for dissolved oxygen and listed as such on the state 303d impaired waters listing. It is also a state designated Tier 3 Anti-degradation waterway.