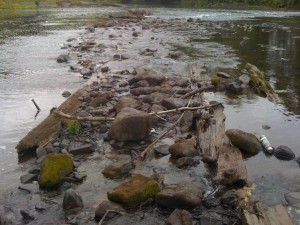 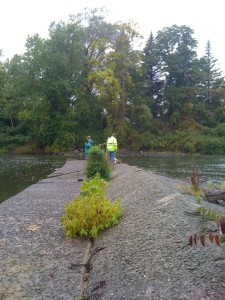 This project will remove the only two remaining dams on the mainstem Conewango Creek to open 28 river miles of aquatic habitat for the benefit of 17 species of freshwater mussels, their fish species hosts, and other resident species.

SunRay Dam is both a physical and velocity barrier for resident fish species: approximately 198 feet of its original 298 foot length blocks Conewango Creek, and the breached 100 foot wide section at river right is a velocity barrier for resident riverine fish, many of which are also mussel host species. The unnamed dam, which is located about 200 feet upstream of the SunRay Dam, was unknown until its discovery at a recent site visit. Though it is significantly deteriorated, its remaining rock-filled timber crib structure completely spans the width of Conewango Creek, forming a low water barrier for aquatic life. This is particularly critical given river fluctuations associated with climate change.

The project will reconnect 28 miles of habitat for freshwater mussels, their fish host species, and the food web. Previous mussel studies (most recently 2010) have documented the presence of 17 species of freshwater mussels in the vicinity of the dam, including the Federally-endangered Northern Riffleshell. By removing the dams, the Conewango Creek mainstem will be completely free-flowing and will provide aquatic organism movement access to reconnected habitat from the Allegheny River to the headwaters. An additional benefit is the elimination of a public safety hazard for fishermen and boaters. A 2006 article published in the Warren Times recounts five fatalities attributed to the breached dam.